'Tis the season... for socialization. And food!

Our friend Ted has graduated and is off to San Francisco, so on Friday we went to to 1UP, a bar in Denver with lots and lots of arcade games. 4-person PacMan is a lot of fun. I also pumped a bunch of quarters into Puzzle Fighter, after remembering that I used to be pretty good at in grad school. (And also into 19XX, which I am not very good at because although it's a shmup, it isn't Raiden DX, which is the one I used to play a lot, and the boss patterns are All Worng.)

It was lots of fun! It's a good place for an outing. Jerry and I also got pics at the photobooth. [Spoiler (click to open)] 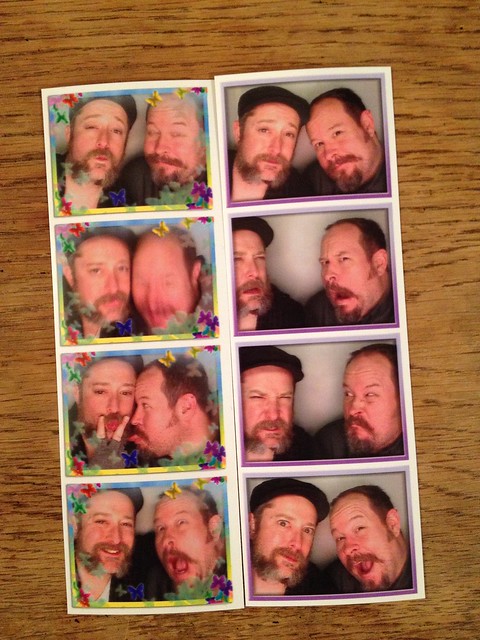 Afterwards, we took the large group to the Old Spaghetti Factory and waited a long time to be seated for mediocre food. My Feral Meter got up to about 5 from low blood sugar, but I managed to stay civil. Hooray!

Saturday, we went over to Glenn & Drew's for a holiday / birthday potluck. So I spent much of the day making parmesan-crusted zucchini and bacon chocolate chip cookies. Because if there's one place you know that cookies with bacon are going to be appreciated, it's a bear party. :) Both dishes were well-received. Had an excellent time. There was a whole lot of very good food and a really great crowd of guys to hang out with.

Here is a picture of the cookies, that you may covet them: And then today I made peppermint pinwheel cookies to take to a yule party that my friend Kent, from high school (who it turns out lives a half-dozen blocks down Lowell from us) had. It's my step-mom's recipe, and I'd never made them before, but I always liked them, so I thought I would give them a shot.

Turns out, swirl cookies are a pain in the ass. Because there's a step where you have to divide the dough in half, dye one half, then roll both halves out into thin sheets, put one sheet on top of the other, and roll them up like a jelly roll. This is difficult. Dough does not naturally roll into rectangles. An amorphous splatty shape is the natural shape of rolled dough. So you have to roll it out, then cut some bits off and move them and roll it again, several times. And the dough is kinda fragile, so neatly laying one sheet on top of the other to roll up is... tricky. I managed it, but it was a pain. Oh, and then there's the step that says "chill the dough for several hours". And after all that I sliced some of them too thin and they got over-browned in the oven, but overall they turned out pretty well for the first time. (Though next time they might end up being just one color...)

Anyway, the yule party was nice and Kent and his wife finally got to meet Jerry, and I sat under the stars next to the fire and it was good.

From now on the days get longer. Yay!
Collapse