Last week at work was mostly about proposal-writing, which was v. blargh. Spent a lot of time trying to get some folks at Goddard on board as collaborators, ultimately without success. Thinking back over the discussion (entirely over email), I kinda think maybe the main guy is required to act interested but wasn't actually. Or maybe it was just a case of they wanted to be wooed harder and earlier. Which, sorry, I still don't have my time machine working. But the nice thing is that on Thursday I successfully pivoted and recruited a different colleague as a collaborator who has a more suitable dataset for us to use anyway, so I think it all worked out.

The time spent working on the Texas thing was much more satisfying. I found a half-dozen weather stations around the target with long records and the analysis came together very smoothly. I figured out how to pull data from the Berkeley Earth project that I was able to use to compensate for station bias, and indeed, there's now a consistent upward trend on everything, just like I expected. Ha HA! I still haven't figured out how to get humidity data to calculate the heat index, and I sorted out an error this morning where I had used (incorrect) heat index instead of maximum temperature in one set of plots (whoops!) but I'll probably be able to come up with something once I'm done proposaling.

I'm really hoping that will be tomorrow. We're on the nearly-final draft. Ben is going to do the references tonight, and I'll have to incorporate any last-minute edits from people who offered a read-through, but then I can do a final proofing and I should be able to hand it over to our admin person. That plus my biosketch and I can walk away from it. I hope.

We went to a tie-dye BBQ pool party this weekend!

Gene and Brandon had a bunch of folks come over to their place to make tie dye this weekend. (Gene is an art teacher, so he knows how to do this kind of thing up proper with fiber reactive dye and stuff.) We also got to make shibori, which is Japanese tie-dye done with indigo.

The shibori was cool; to dye stuff with indigo, you put the dye in a bucket of water with some kind of activator and wait for a chemical reaction to happen that reduces the indigo molecules. You dip your (tied-up) fabric in it for a couple minutes and the pigment binds to the cotton. You pull it out and it's a pale green color, but you let it hang for a few minutes and it turns blue as the indigo molecules re-oxidize. And then you do it a few more times to get it darker. (The indigo dye is also fairly stinky, in a sort of sulfurous outhouse way. I thought it was bad but not horrific, but most of the others thought it reeked. I guess my comparative insensitivity will come in handy if I ever get sent back in time and have to find a job.)

I don't really like wearing t-shirts anymore, so I did three dress shirts: two long sleeve and one short-sleeve. I did one of the long-sleeve shirts traditional tie-dye and the other two shibori. I was really pleased with how they all came out! You can see the traditional one in the picture below. 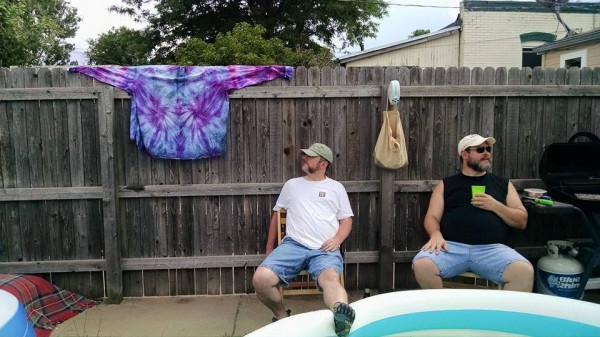 The BBQ portion of the gathering was provided by Brandon, who made excellent pulled pork and hot wings. And there were two inflatable wading pools for the pool party. They were a mite brisk at first (filled by garden hose that morning), but made for excellent cooling off during the hotter part of the day.

Later that afternoon, after things were winding down on the tie-dye front, Jerry and I persuaded Cris & Steve to come along with us to walk up to Sloan's Lake and check out the Dragon Boat Festival. It tried to rain on us on the way over, but then it just turned into nice cool weather with clouds and a breeze. A nice walk with lovely socializing.

It was a most excellent event, and I'm excited to wear my cool new shirts at work.

That was Saturday. Yesterday we did not very much (Jerry from some sunburn, and me from unhappy feet and calves, protesting mightily from wearing older shoes with no cushion left all day.) But then Garrett & Tim invited us over for dinner and a bit of Rock Band. So I whipped up a coconut custard pie and they fed us a really excellent meal: grilled steak and tuna with artichokes. Delightful!

And I mustn't forget that last Tuesday, Jason H had us over for dinner with him and housemates Stu & Nick and his visiting houseguest (whose name I have forgotten because I'm a terrible person). J made very tasty pasta with red sauce, with the pasta cooked in chianti. Yummy! We also played a bit of Cards Against Humanity, but had to pumpkin before it got too late.