I Finished All The Things!

I finished off my presentation and did a run-through for my group on Friday. It came in at 14 minutes (I have 15, minus a couple for questions), so that's good. I have a couple tweaks to make and a smidge of trimming to do, but basically, it's good to go. And I finished up the draft of the two-page pre-proposal thingy. It is now in other people's hands to edit and I'm done with it until we send it in on Wednesday.

At the annual awards ceremony on Friday, the project I work on received the award for Outstanding Scientific Achievement. Which comes with a freakin' medal for all involved. And a check for a not-insubstantial amount of money. So that's pretty darn cool.

I flew out here to San Francisco yesterday (Saturday). It was an uneventful travel day, and once I got checked into my hotel around 3 I spent the rest of the day settling in and getting some downtime, which has been sorely lacking of late. I didn't reserve my hotel room early enough, so I'm up the hill from Market street a bit this year. My hotel room is smallish but still nice and bills itself as being very green.

Jess & Colin threw together a short-notice brunch for me this morning. We had Christy & U-Boat, Jess (Chuck), Rawhide, Julee, and Ariel there, too, plus assorted sproglings. The food was so tasty I took a picture of it, which you can see below. That's sous vide Eggs Benedict with crab. I know, right?!? 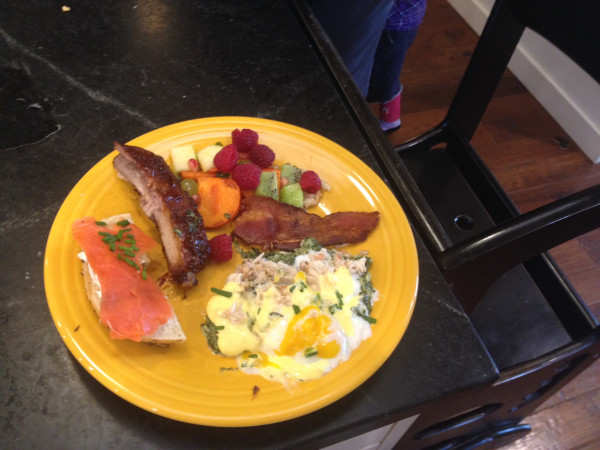 Anyway, had a great time catching up with everyone, hooray! The rest of the day was pretty much just more downtime and filling out my schedule for the conference. At dinnertime, I determined that there are a bunch of really good-looking restaurants near my hotel that are all closed on Sundays because they're in the Financial District before realizing that if I go through the big Dragon Gate that's right on the corner of the block my hotel is on, I'm in Chinatown, where there is food. I had a dim sum plate plus mixed veggies and got to see a lion dance performed on the street for an arriving personage of some kind on the walk back.

And now to bed, as my schedule tomorrow starts early.
Collapse