Last week was quite busy. D&D on Saturday was followed by a zillion chores and errands on Sunday. Okay, well, probably more like a dozen, but they still took up most of the day. Among other things, I dyed the gray* hair in my beard blue: 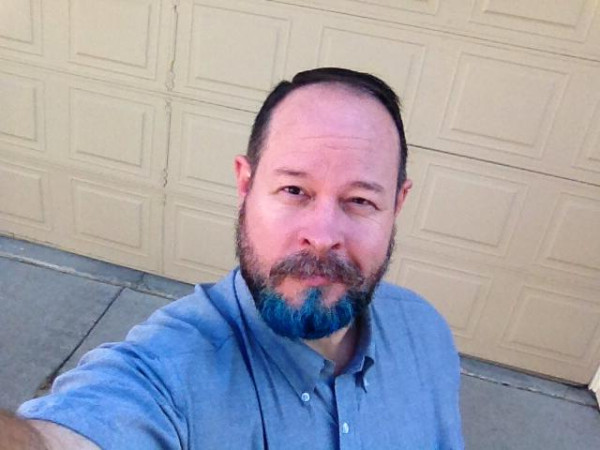 I was gonna go for a darker blue, but the beauty supply store was out of stock of most of the blues, so I went with "Azure" instead. I mean, what the heck, it's just decorative and it's gonna wash out before long anyway.

Monday was pretty much the only evening last week that I didn't have something going on. But it was also the start of a three-day workshop on Bayesian modeling that I took, so that was fine. I learned a lot (mostly a bunch of different and exciting ways that your model can fail to work properly), and it was keen. I think I stand a chance of being able to actually run such a model for real now!

Tuesday evening I went and saw Peter Gabriel & Sting at the Pepsi Center, which I'll post more about separately. (It was awesome.) And then Wednesday was the second Inclusivity Board meeting. It's still not totally clear to me what our mandate is, but probably we'll be able to provide some useful advisement regardless, so hopefully a navigational target will arise in time.

Thursday was games night at Chris's. I played two new games that I was favorably impressed by: Nefarious and Quantum. Nefarious is a card game with a little bit of meeple investment where everyone plays mad scientists building doomsday weapons. It was quick and fun. Quantum is a 4X-style space game where all your spaceships are dice, with power, speed, and abilities determined by which side is facing up. It manages to capture the 4X feel without bogging down, allows for different strategies, and is well balanced. Thumbs up to both.

Friday after work I went to a house re-warming for a friend from high school (Kent) who lives nearby; had a good time and ended up staying longer than I'd expected to. The really interesting thing is that I've been trying out a ketogenic / high-fat low-carb diet, and even though I hadn't had anything to eat since lunch, I didn't feel compelled to graze continuously on all the chips and snacky things. Which, like, never happens. And even though I got a workout that afternoon, I didn't get a low-blood-sugar headache and want to kill everyone when a bus misadventure on the way home caused me to lose half an hour and have to walk an extra 2/3 of a mile to catch the FF1 back from Union Station! So I think it's working.

Yesterday Monkey went to a board breaking seminar for kempo while I went to Bob & Pyro's for a pool party. He bruised his heel and his right hand hand and I sunburned my upper arms. We both had a good time. :)

Today I managed to go to the grocery store and call my mother and write this blog post, and that's it. I has a tired now.

Also, over the last couple weeks we watched both seasons of Gravity Falls, which I will recommend to anybody who hasn't seen it.

(*Random aside: I know that gray vs grey is mostly American vs British spelling, but I feel like gray with an A is for warm yellowish grays, and grey with an E is for cool bluish greys. Is that just me?)
Collapse