So last week I went and saw Sting & Peter Gabriel in concert.

I had seen quite a while back that they were touring together, and that they'd be playing in Denver at the Pepsi Center. I I had been dithering about whether or not to go to, and then that Sunday evening (after a fairly full day of chores & errands) Monkey & I played some Rock Band in the basement, and I was reminded that every so often I need to hear really loud music. So I went.

The concert was on a Tuesday evening. I bought myself a ticket on Monday night off Flashtickets (the official resale site) and actually found a really good deal: right in the middle of the back row of section BBB (the one right in front of the stage) for only $99! (Well, plus a $22 official scalper's fee from the website, but still a good deal.) There was a little bit of a kerfuffle when I got to my seat; I was in row 22, seat 10 and the guy in seat 9 said he & his wife (who was off getting a drink) were in seats 9 & 10. So that was a problem. The usher-types sent us off to the main customer service desk, and they determined that yup, we did indeed have legitimate-looking duplicate tickets, so they bounced us to customer service over at the box office. We waited and fretted about the concert starting, and then a guy came out and took our tickets into the back, and after a bit he came back and told me I was good to go but started asking the couple questions about how they purchased their tickets. I ran off to watch the show and didn't hear any more, but at the end of the show I told the gal in seat 9 about the situation, and she got her tickets for a pretty good price online, too, and the couple had physical tickets, so I think somebody resold a pair of tickets twice and they got scammed...

It was a very good show. Mostly Sting & Peter bounced back and forth, taking turns playing songs, but they played quite a few songs together, too. They covered a couple of each other's songs, too; Peter covered If You Love Somebody Set Them Free and made it sound wicked and dirty.. It was pretty cool.

Visually, the show had 14 big LED panels hanging above and behind the stage that moved up and down and played coordinated chunks of video. They also had textured covers on them that were lit with colored lights from above and below. They got a lot of different effects out of them, and it was a fun show to watch as well as listen to. 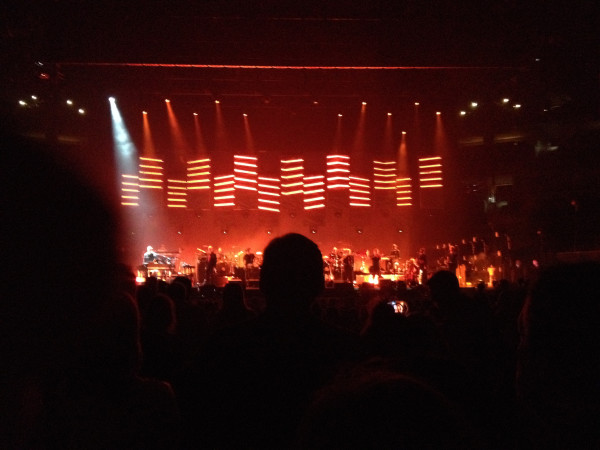 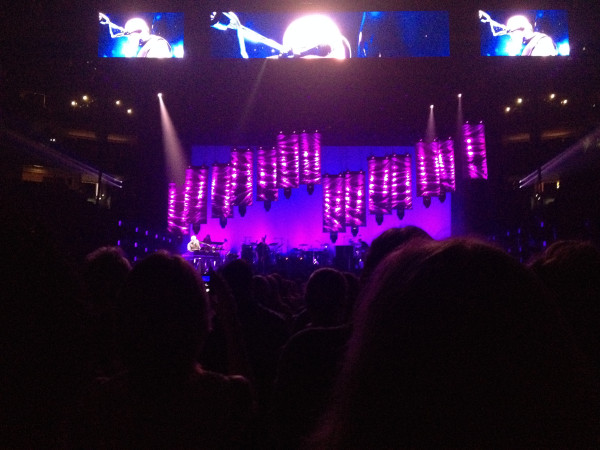 As you can see, I had a really good seat. There was a tall fellow right in front of me, but after the first couple songs, he actually spent most of the show sitting down. Thanks, tall stranger!

I found a setlist online, which I have copied below. Sting's selections were a bit more in mellow mode, but he played Desert Rose, which was fantastic, and Every Little Thing She Does Is Magic, which are two of my favorites. And Peter played all the really important songs: Solsbury Hill and In Your Eyes, and, most of all, Secret World, which made me weep openly and was worth the price of admission all on its own. So I was very happy.

I met up with Karen & Thomas afterwards -- they managed to score free tickets from Thomas's work and had the evening free with kids off at the grandparents' for the week, so they got to watch from a private box almost straight behind me -- and we hung out for a while outside waiting for traffic to clear up. Astonishingly, I ended up parked very close to an exit, and it only took me about 5 minutes to get out of the parking lot! It was a nice cap on a great evening.
Collapse